The African Methodist Episcopal Church grew out of the Free African Society (FAS) which Richard Allen, Absalom Jones and others established in 1787 when they took a “bold stand” and walked out of the all white, St. George Methodist Church in Philadelphia, Pennsylvania.  Their response to the whites was “wait until prayer is over and we will trouble you no more.”

The geograpical spread of the AMEC prior to the civil War was primarily in the Northeast and Midwest.  The most significant denominal development of the church occurred during the Civil War and Reconstruction and in 1880, AME membership reached 400,000.

Today, the African Methodist Episcopal Church has membership in twenty Episcopal Districts in thirty-nine countries on five continents. The work of the Church is administered by twenty -one active bishops and nine General Officers who manage the departments of the Church. 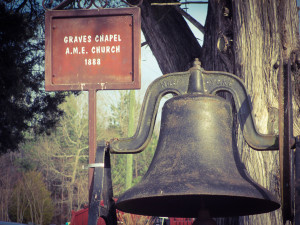 Many years later in a small unincorporated community of Georgia, in approximately the year 1819, Solomon Graves along with his son Iverson Dalton Graves, migrated to Georgia from North Carolina. Solomon Graves owned many slaves and before his death gave land for a “Negro” church, school and cemetery. Graves Chapel African Methodist Episcopal Church was organized as an AME Church in 1888 under the leadership of Bishop John Wesley Gaines, the sixteenth Presiding Prelate of the African Methodist Episcopal Church.  Henry Lea Graves, the son of Iverson Graves and grandson of Solomon Graves deeded the land for the church and school on October 2, 1890.  Graves Chapel AME Church was rebuilt in 1916.